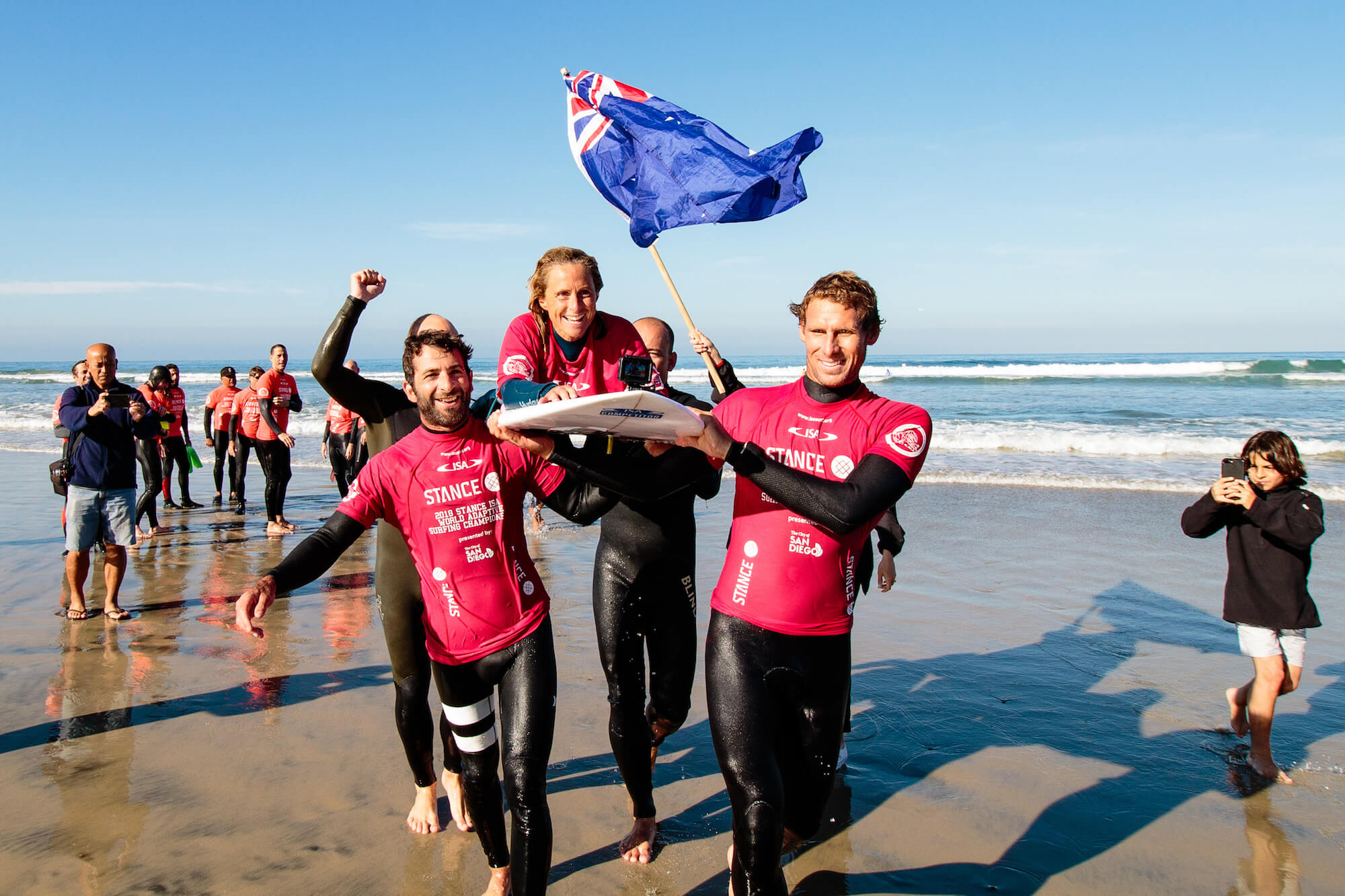 Early last year I made a reluctant return to surfing after a 5 year hiatus.

I say reluctant because I knew it wouldn’t be the same and I was scared I would be disappointed.

It turned out that I was right, it wasn’t the same, but I was wrong about being disappointed, it was exactly what I needed. Being back in the water and surfing with Noah and Cam again just felt amazing.

After finding my rhythm, I felt like I needed a new challenge and entered the Australian Adaptive Surfing Titles at Cabarita Beach on the NSW North Coast in June. I did pretty well and was happy to be selected to the Australian Team as a result. 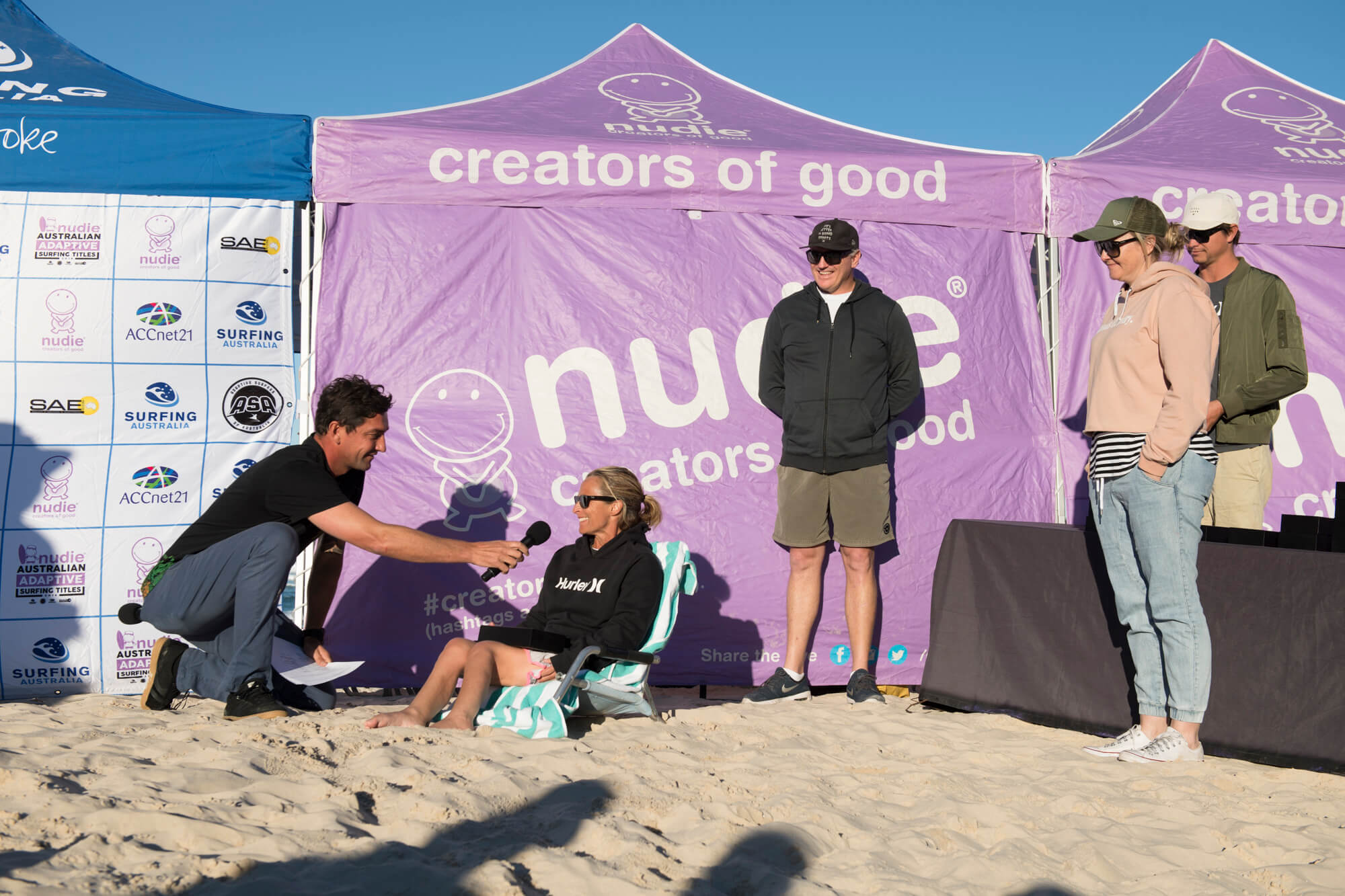 In December last year, Cam, the boys and I all traveled to America where I had the chance to compete in two major events in California. The Adaptive Surfing Challenge at Huntington Beach and the Stance International Surfing Association (ISA) World Adaptive Championships in La Jolla as part of the Australian team.

I was incredibly proud to come home with two World Championship medals, but it wasn’t an easy ride.

Three weeks before we left I was interviewed for an article in a local paper and the team wanted to get some action shots for the story. Cam and I got in the water at our local beach on a beautiful, clear day with perfect conditions. We caught some awesome waves and were having a great session, but getting off waves can be challenging for me to say the least and when I caught one that I couldn’t skip off, I went head-first into the rocks. 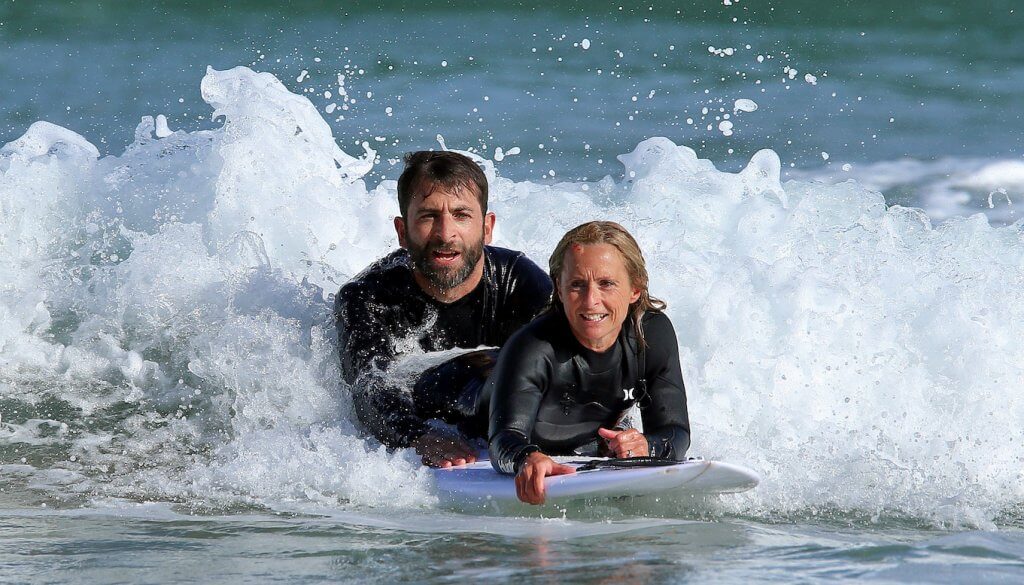 My head took a beating on the rocks

Luckily, the photographer came to my rescue and while I was pretty embarrassed and a little banged up, I didn’t think much of it.

The following day I noticed a serious lump on my thigh and we knew I had to get to the hospital for an x-ray. Luckily nothing was broken but the week before we were set to take off for LA, my doctor called with some concerns about me flying after my leg injury. After a nervous day of tests at the hospital I was thankful to be cleared and we went back to preparing for the trip.

I wasn’t at all prepared for what happened next.

Just a few days before we were set to leave, I got the word that the ISA planned to reclassify me from my usual AS-5 classification to AS-4. I was devastated.

Each adaptive sport classifies it’s athletes as best they can into categories that make it fair for them to compete against each other and AS-5 was the only category I had surfed in. This meant the difference between Cam helping me in the water, and not! I’d never surfed without Cam in that way before and I was feeling gutted at the thought of letting everyone down including my family, the team and my sponsors.

I decided I would give it a go either way, but we were determined to fight for me to stay in the classification I’d trained so hard for..

This meant a huge amount of work to put a case together as the onus was on us to prove that I should be competing in AS-5, but and after spending hours being assessed at the physio on the Saturday and pulling together a mountain of paperwork on the Monday, we jumped on a plane to LA on Tuesday and hoped for the best.

Thankfully, I was able to surf in my usual classification in the Huntington event and I surprised myself by taking out first place overall. I was still holding out for a decision on the La Jolla event though and feeling super nervous about it. 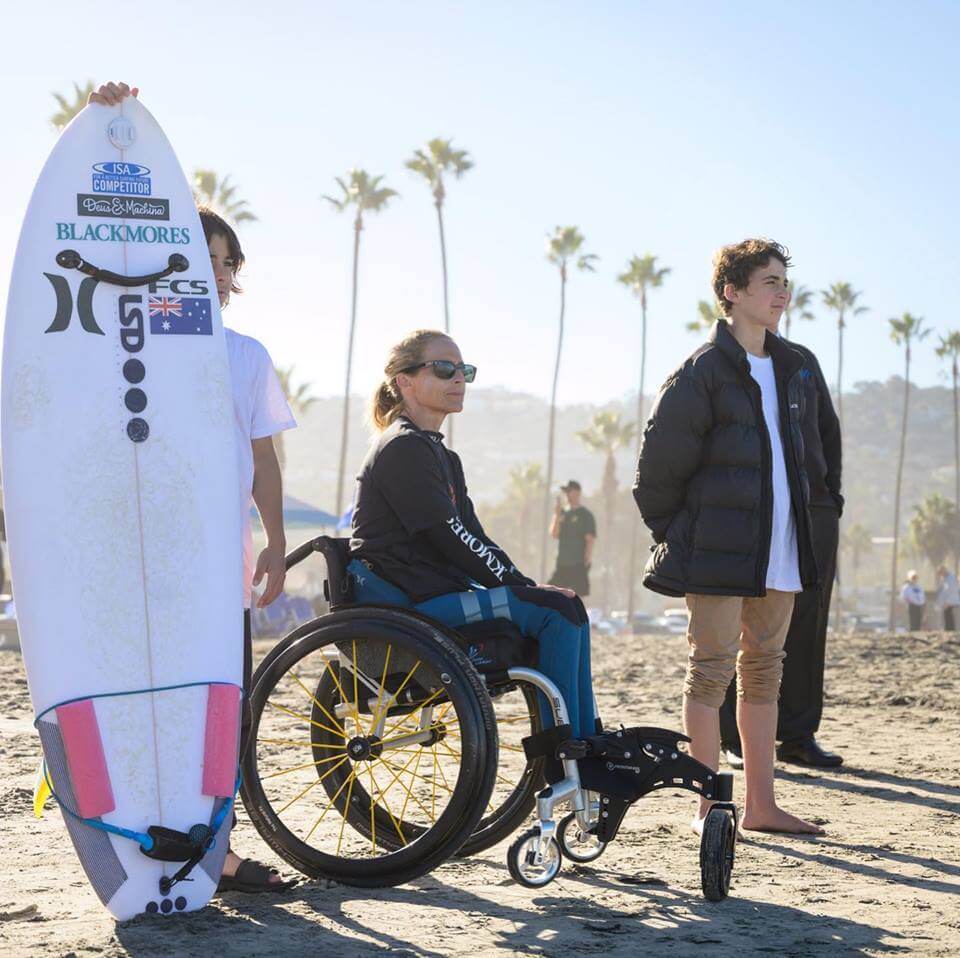 The World Champs were set to start in just 3 days when the ISA told me they wanted to do an in-water assessment to make a final decision on my classification. This was probably the most nervous I had been in a long time but within a few hours I found out I was able to surf in AS-5 and I’d have Cam with me in the water just like normal.

I entered both the Women’s and Open Divisions, which meant I was up against the best men and women from around the world in my category. The heats were tough, but it was reassuring to have both Cam and the Australian coach in the water with me to push me onto waves, help me paddle back out and of course settle my nerves and just be patient and pick the best waves. 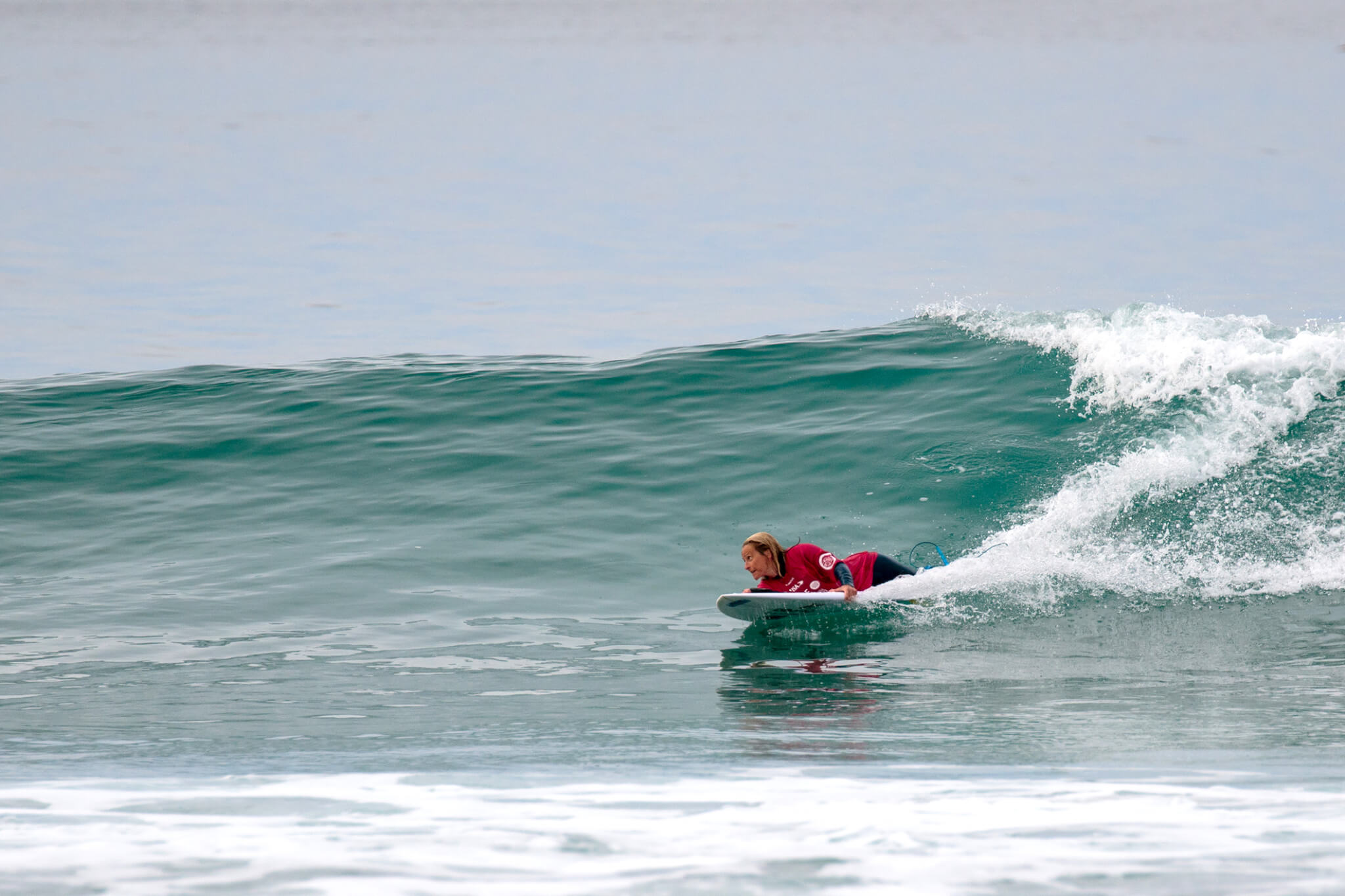 Luckily the waves were awesome and I made it into the finals undefeated in both the Women’s and Open divisions.

Cam and I had no idea who was winning in the Women’s final and it wasn’t until it was over and I’d caught my last wave in when the Australian team rushed over to congratulate me and told me that I’d won and become World Champion.

As the only woman on the team, I felt incredibly proud to represent Australia, to have Cam by my side and to have our three boys be part of such an amazing event.

I’m also extremely grateful to everyone who helped make this happen, particularly the team at Blackmores Australia who I really can’t thank enough for their ongoing support.

It wasn’t exactly smooth sailing, but it was totally worth it, especially since just a couple months after coming home from the States, I found out I was nominated for the Surfing Australia 2019 Female Surfer of the Year, alongside Stephanie Gilmore who has won 7 World Championships in her career.

I didn’t win, but I was incredibly honoured to have been considered!

This year is shaping up to be busy, next up is the Wings for Life World Run in Manly on 5 May. Our movie starts filming end of July and Cam and I are working towards returning to the World Champs at the end of the year.

Thanks to everyone who has followed and supported along the way, it means a lot.