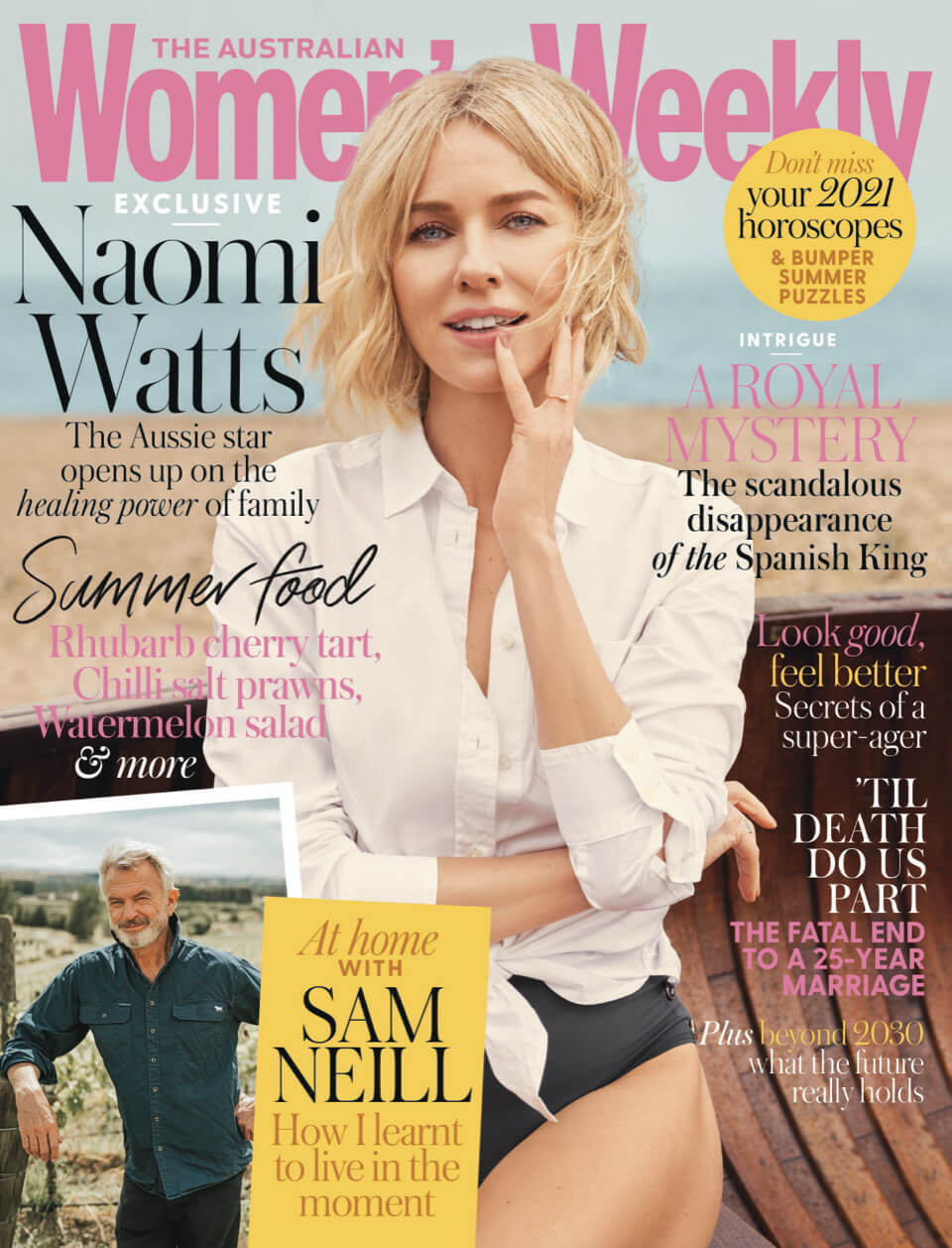 This article first appeared on nowtolove.com.au. Click HERE for the original.

Lessons in life and love

Naomi Watts on the power of family love, bringing her children back to Australia and embracing her 50s

Naomi Watts was at home in New York when she started leafing through the pages of the book that would change her family’s world. Penguin Bloom had been sent to her by fellow producer Emma Cooper who thought the unique true story might make the basis for a film.

“I just want you to look at this and see if it captures your imagination'” Emma said, gently seeding an idea she was convinced would interest Naomi. She was right!

The 2016 book about Aussie mum Sam Bloom with husband Cameron’s intimate photographs of Sam, their family and the injured baby magpie they adopted takes your breath away and was about to light an eternal spark in Naomi and her children.

“I put the book aside and then pulled it out on Sunday. It was a lazy morning in bed and the kids – [Sasha and Kai] – were still little. I remember being completely captivated by these images and I thought, particularly for one of my kids who is very much into nature, and from the age of about four can tell you about every animal – what it eats, its habitat, how it lives, every detail, every country it comes from, everything – I knew that I would at least get his interest.

“But then we all got into it. I just kept turning the pages and reading and reading and turning pages and seeing one more beautiful image after the next. I was thinking ‘How did they capture that moment? That doesn’t make any sense. Let me read more – and then the story started coming back to me.”

The British-born Oscar-nominated actor who moved to Sydney when she was 14 and then, chasing a Hollywood dream, relocated to the US in the mid-nineties, was vaguely familiar with the Bloom family story.

She’d heard about Sam from Aussie friends in her former home town and seen her in the media. This woman in the photographs – slight, ethereal, wheelchair-bound, caught in moving reverie as she nuzzles a wild magpie – was that Sam Bloom, the super-active Sydney beaches mum of three and ardent surfer who suffered a devastating spinal cord injury in a freak fall on holiday in Thailand in 2013. In that instant the life Sam knew ended, replaced with nightmares, pain and darkness until this wounded wild bird saved her.

As Naomi was about to discover, in truth Penguin – named by Sam’s son Noah who found the bird – was more of a friend than a saviour, but that unique relationship with a scruffy little magpie, proved to be a turning point for the whole Bloom family. Sam nursed Penguin, confiding in the bird and together they started to heal.
“What I realised reading the book together, is that it created this really powerful experience that drew us all in as a family unit and in that moment, I thought this is a story about a family and how powerful that need is to be together and connect. It’s about how they rebuilt themselves through the magic of this bird, but really it was the family, and the bird was the crutch of that family, literally,” notes Naomi.

“In that instant it was compelling in ways that I hadn’t experienced before. My kids were really drawn in, particularly Sasha, and they had lots of questions. They loved the funny images, the lighter images, with the bird eating funny things. They just loved it,” she adds with a sigh, “and I knew that it would make a really beautiful story for the cinema.”

Naomi’s eyes light up as she talks about the family she and her children now count as personal friends. She immediately felt attached to the story because of its Australian setting and relished the idea of making a film back in Sydney where she’d spent her teenage years.
This would be a family affair, as she planned to bring her children with her to experience Sydney beach life and connect with the Bloom world they had glimpsed that Sunday morning reading the book.

“I hadn’t made a film in Australia for a long time and to develop it from the ground up was very exciting,” says Naomi. “It felt like this story of hope, of survival, was universal and powerful for anyone.”
Naomi signed on, not just to play the lead, but also as a producer, personally “chipping in to buy the rights to the book”. As she worked to get the project off the ground, her passion heightened and when she met Sam in person over breakfast in a hotel in Sydney she knew this was going to be a very special film.

“Right away I just knew,” Naomi smiles. “It’s always nerve-wracking when you meet someone that you’re going to play. You never know how they’re going to feel. Are they going to be overly attached or are they going to be able to bring something that will open you up in ways that you hadn’t thought of and bring ideas to the table? But before we’d even started talking, I knew. I just felt a deep connection with Sam that made me feel safe.”

Key to understanding Sam’s terrifying new normal was getting inside both her head and her body. Naomi needed to fathom the private thoughts tumbling around Sam’s brain.

Sam refuses to sugar-coat her situation. She hates what the accident has done to her, robbing her of being the woman and the mother she used to be and longs to be again. She questions the life she is left with but somehow, every day her courage wins through, fuelled by her family’s love and a need to not let her boys down.

It’s a powerful dynamic perfect for a compelling film but Sam was also keen to ensure the movie of her life would depict the whole truth sans Hollywood gloss.

“Of course, I was stoked that Naomi would be playing me,” Sam confides. “But before the production started, I sent her my diary. It’s something which only a handful of people have seen, but I wanted to help her know how I was feeling inside.”

The journals were invaluable Naomi tells me, fiercely honest and often heartbreaking.

“Sam was so generous. Her diaries were deeply personal and unbelievably helpful.”

Throughout her career Naomi has embraced tough roles and had no intention of papering over the cracks of Sam’s battles.

“I don’t think of myself as being afraid of darkness. I think it’s part of human nature. If something has been taken from you as big as that, and particularly for someone like Sam who was the most active person, it was just unimaginable.

“I felt deep empathy for her and her loss. I was deeply impressed by how she has found ways to manage it and navigate it, and yet still there’s lots of anger and frustration. It’s a constant road ahead of healing. She deals with not just the psychological loss but the physical pain as well, constantly.”

As the film started to take shape Naomi spent hours talking to Sam developing a profound understanding of the realities of her situation.

“Sam’s saying: ‘Yes, I’m getting through, I’m still here, but it’s not over. It’s not like a little bird came down and saved us. Yes, it created some magic, it created some bonding, but the work isn’t finished; I’ve just found better ways to manage it. That’s a great lesson for all of us and incredibly empowering because a movie like this should help you explore what if it were you? How would you manage it? Who are you in that story?”

As a mother of two herself, that journey hit a chord.

“It’s absolutely a family story. Yes, Sam’s at the centre of it but she’s very connected to her children and her husband. Every day is a new day. It was about rebuilding the whole family structure. They all lost something in the process and they all manage it in their different ways.”

Naomi met the Blooms en masse right from that first encounter with Sam.

“They all came. They’re a very close-knit family,” she laughs. “Cameron is so full of positive energy and Sam seems very shy and demure at times but she’s got to be strong, she’s got real courage, she really does.”
It would be confronting for Sam, Cameron and their three sons to watch actors playing them on the big screen, but the Blooms never flinched and gave their all to the project.

The film was shot in their actual home high above Bilgola beach and the family moved up the road regularly visiting the set.
“The family had a lot of input and it was always 100% welcome,” says Naomi. “They were reading the scripts as we were producing them and often times I would go to Sam and say, how would you have approached this?”

“Naomi was so unreal; she’d ask me to come on set and if they had to do a specific thing, for example, if she had to get dressed, she wanted to make sure it looked right. It was weird watching the monitor thinking, ‘oh my God, she’s playing me’, especially when I’m just me. And she’s incredible,” laughs Sam.

Read more in the January issue of Australian Women’s Weekly, on sale now.