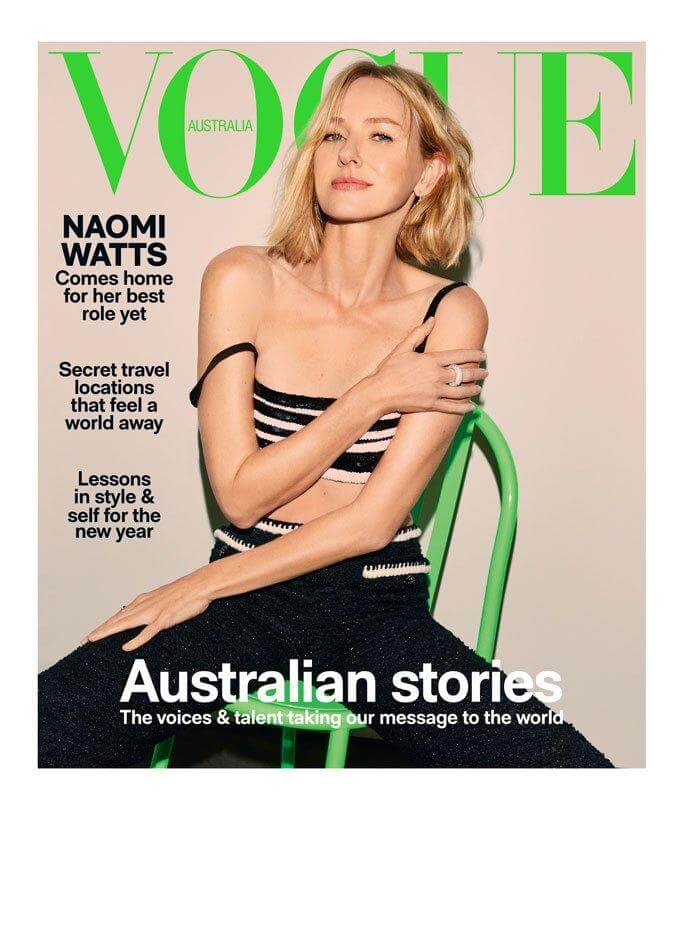 This excerpt first appeared on vogue.com.au. Click HERE for the original.

Naomi Watts returns to screens this month in Penguin Bloom, a moving Australian film that offers an inspiring start to 2021. The film reflects upon the story of how one magpie helped heal and restore hope to a devastated family—and it’s the remedy we all need now.

Here, read the five most fascinating facts we learned about Watts from her cover story.

She both stars in and also co-produced Penguin Bloom
The English-born, Australian-raised actor plays Sam Bloom in the movie, an Australian woman who became paralysed from the waist down after falling from a balcony in Thailand in 2013. A magpie was Bloom’s unlikely saviour and helped restore hope in her and her family. It’s also the first film Watts has shot since 2013.

She was required to get up close and personal with magpies for the film
In the cover story, the 52-year-old actor explains how multiple magpies actually played Penguin and on the first day on set, she had to let one of the birds perch on her head. “It just sat there and let a movement come trickling down onto my face … it travelled right down the centre of my face,” the actor tells writer Stephanie Wood. “I opened my mouth with sort of a half scream and half laughter and it went straight into my throat. Luckily I’m not squeamish about stuff like that. I’m a bit of a farm girl at heart.”

The real Sam Bloom helped Watts prepare for the role
Watts explains how Bloom gave her all of her raw diaries to read and often stayed on set during filming. “She was so lovely,” says Sam. “She’d always say sorry when she jumped up from the wheelchair because she felt guilty. She’s got a big heart, Naomi.” Watts also had to learn to kayak for the film (Bloom took up kayaking after her accident two years later, she became a member of the Australian para-canoe team for the 2015 World Championships in Italy).

She plans to produce more movies
Watts reveals she is interested in doing more work as a producer and says she has two ideas for projects. “All things going well, we might have a final product at some point,” she jokes. This year, she will also star in Phillip Noyce’s thriller Lakewood, about a mother desperately racing to save her child, the only other project she worked on during lockdowns. “When I got that first call sheet, I nearly burst into tears. I was like: ‘Oh my god, yes, we get to be creative again.’”

She’s mastered TikTok
Naomi Watts has 1.4m followers on Instagram and she’s recently mastered TikTok too, posting TikTok dances starring her whole family, including her former partner, fellow actor Liev Schreiber. “Yeah, look, I can only do me, right,” Watts says in the cover story. “I think I opened up a whole lot more during Covid … I needed to laugh. I liked that other people might get a laugh out of some stupid things, me sending myself up. I’ll do anything for the joke!”

Penguin Bloom is in cinemas January 21 and Vogue’s January issue is on stands today.

The full story with Naomi Watts is available to Vogue VIPs here.